Overnight street parking is permitted from December 1 to March 31, except when a snow removal alert is in effect. In this case, parking on the streets between midnight and 5:30 a.m. is prohibited. The ban will be in force throughout the entire municipality.

It is your responsibility to find out if a snow removal operation is planned. If your vehicle is parked on the street and is likely to interfere with snow removal, it may be ticketed and towed. The car will be towed at Seaway Park.

If no snow removal alert is in effect, overnight street parking is permitted throughout the city, except where signs indicate otherwise.

How do I find out?

The City notifies the public no later than 4 p.m. that an alert is in effect or has been lifted. There are a number of ways to find out:

bciti portal
Where can I park when an alert is in effect?

During the no-parking period, alternative parking options are available.

On-street parking (in the parking lots and not on the road) :

You must observe the indications on the signs for each parking area. 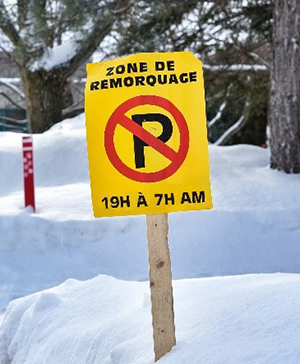 If no snow removal operation is in effect, overnight street parking is permitted between midnight and 5:30 a.m., except in permanent no-parking zones.

How to facilitate operations

You can assist our snow removal teams and help operations run smoothly by adopting certain behaviours.

Place your waste bins in your driveway

Always place your waste bins in your driveway, not on the street or sidewalk, so that snow clearing vehicles can get around more easily. If possible, remove your bins as soon as they have been emptied. When there are obstacles on the sidewalk or vehicles parked too close to the sidewalk, equipment operators have to skirt around them by moving off the sidewalk, which means poorer snow clearing.

Pile your snow on your property

When you are clearing the snow off your driveway, you must pile it on your own property so that pedestrians and vehicles can get around safely. If a contractor does your snow removal, you are responsible for telling him that he must deposit the snow on your property and make sure that none is left in the street or on the sidewalk.

Remove all vehicules from the street

By obeying the parking restrictions, you allow snow removal vehicles to travel freely along the streets and clear the snow efficiently.

Keep informed about our priorities

Spreading anti-icing agents, plowing, snow blowing, loading, etc. are different operations carried out during snow removal. We will keep you regularly informed during the winter when major operations are going to take place in our city so that you can help us ensure that they go smoothly, for example, by removing your car from the street.

Consult the Snow removal logistics section below to learn more about the various operations and how they are carried out.

Snow removal is a complex logistical operation that is carried out in several steps and according to certain priorities. These steps are carefully planned in light of the weather reports received and begin as soon as it starts snowing.

Despite careful planning, many factors can influence snow removal logistics and how long the operations last:

This means that if snow falls during operations, the intervention time and operational priorities revert to zero. The teams resume snow removal operations by prioritizing the main arteries and collector streets, followed by local streets.

Snow removal operations are planned in accordance with our snow removal policy. The overriding aim is safety. That is why our streets are prioritized for clearing by their level of importance in maintaining essential services.

We have our own snow removal teams in Saint-Lambert. At the peak of a snowstorm, more than 30 vehicles and 40 employees are dispatched over several work shifts to clear the streets. These numbers exclude the private truck drivers who help us out with loading and hauling. The snow removal routes they follow are planned in a way that ensures your safety, efficient operations and the shortest possible intervention times.

Spreading of melting agents/abrasives and plowing

As soon as any traces of snow appear on the ground, our teams get into action to spread melting agents or abrasives and to plow P1 streets. If there is an accumulation of 2 cm, they then tackle P2 streets. Melting agents are spread on P2 streets only 15 m before stop signs and on hills and curves.

Intervention timesAfter leaving the municipal garage, the teams take from 5 to 7 hours to perform a first snow clearing operation on all P1 roads and streets, and from 7 to 10 hours on P2 streets, when there is less than 30 cm of snow. If the snow keeps accumulating, the snow clearing work continues until the end of the precipitation. When the snow clearing vehicles pass a second time, they only spread melting agents as needed in order to limit the use of abrasives, which are harmful for the environment.

Once the snow has stopped, if necessary, the teams begin snow removal operations. This type of operation is carried out only after an accumulation of around 10 cm. Wherever possible, snow that has been pushed to the side of the road is blown onto the adjacent properties as this is much faster, more economical and more environmentally friendly than blowing the snow into trucks.

The duration of a snow removal cycle depends on the amount and type of snowfall.

As soon as any snow has accumulated on the ground, crews start spreading abrasives and clearing sidewalks in the same order of street priority. However, to optimize operations not all sidewalks are cleared.

For a snow accumulation of less than 15 cm, it takes approximately 8 hours for our teams to clear all the sidewalks. Generally speaking, the operations are planned to ensure that sidewalks are cleared by 7 a.m. in the morning to allow pedestrians to walk safely, whether to school, work or the bus stop.

When more than 30 cm of snow have fallen, only the sidewalks along the main arteries are cleared to begin with. In some cases, during major snowstorms, we may even have to pile snow on the sidewalks to ensure a wide enough road space for emergency vehicles to get through. This type of situation is only temporary, and the sidewalks will then be cleared as soon as possible.

Tell us what you think

The site of the city of Saint-Lambert uses cookies to ensure the proper functioning of certain features such as the display of alert banners at the top of the pages of the site and the automatic scrolling to confirmation messages when submitting form. You can accept these cookies to preserve these features or refuse them.